Which phones lose their value the fastest (and what can you do about it)?

The world of tech moves fast. Every year, fancy new gadgets land with faster processors, sharper cameras, and better software, seemingly pushing last year’s flagships aside into oblivion. When that happens, these “old” devices just aren’t that valuable anymore. Today, we’re teaming up with Decluttr for the latest metrics on which makes and models hold the most value, which phones depreciate the fastest, and more.

This’ll be a shocker (brace yourself), but your phone actually depreciates the moment you drive it off the lot (or something like that). It’s true! It doesn’t matter if your device was made by Samsung, Google, or even Apple — all of them lose their value over time. But also as you may have guessed, some devices lose their value faster than others.

Top 10 phones that retain the most value over time

Take a moment to find your surprised face. You’ll never guess which phone brands retain their value over time.

Generally speaking, devices made by Apple, Samsung, and Google (in that order) all maintain the highest average value across the board. Within those brands, though, the story isn’t so cut and dry

It should come as no surprise to most that 8 of the 10 phones on the most valuable list are Apple handsets. We start off with the standard iPhone 11 maintaining 63% of its value after 12 months. In second and third place sit the iPhone XS Max and iPhone 11 Pro Max, both maintaining 57% of their value within the same timeframe. After that follows the iPhones 11 Pro, 8 Plus, XR, and 8 retaining 54% to 48% of their value.

Rounding out the final two slots on the list are Google’s Pixel 3a at 48% value retention after 12 months and the original Pixel XL with 47% of its value intact in that same timeframe. Oddly enough, Samsung’s handsets are nowhere to be seen on this list. More on that in the next paragraph. ?

On the flip side, some phones are terrible at retaining their value after the first 12 months of ownership. Samsung and Google hardware fans should look away, as these make up the top 10 phones that have depreciated most as of 2021. 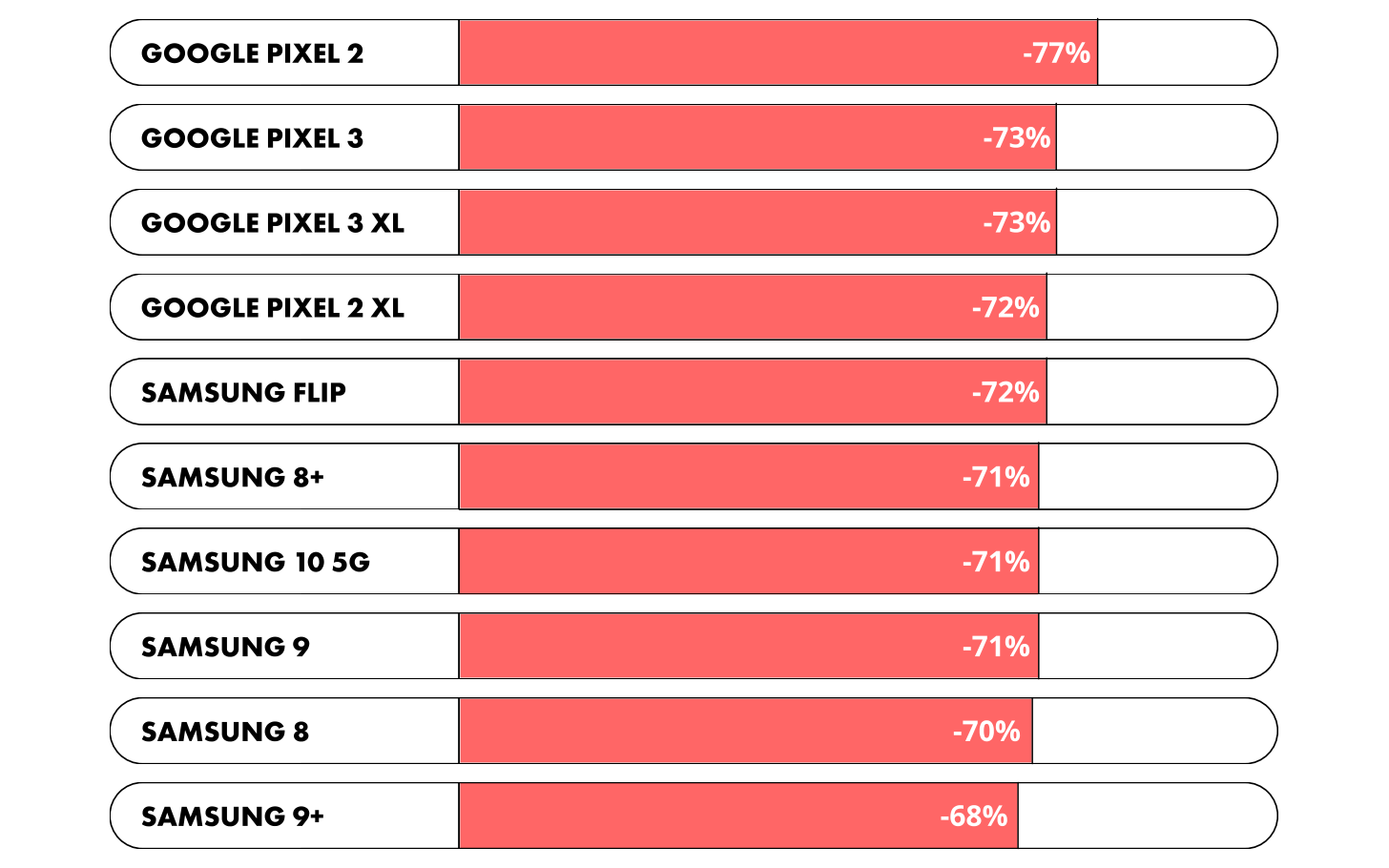 Following up the lower half of the depreciation frustration list, Google’s Pixel 2XL ties with the Z Flip at 28%. Then comes the Pixel 3 and 3 XL, both of which retain only 27% of their value after the first year. Finally, in dead last sits the Pixel 2, which keeps a paltry 23% of its value after 12 months.

To read Decluttr’s full phone depreciation report for 2021, check it out here.

What can you do about your depreciating phone? 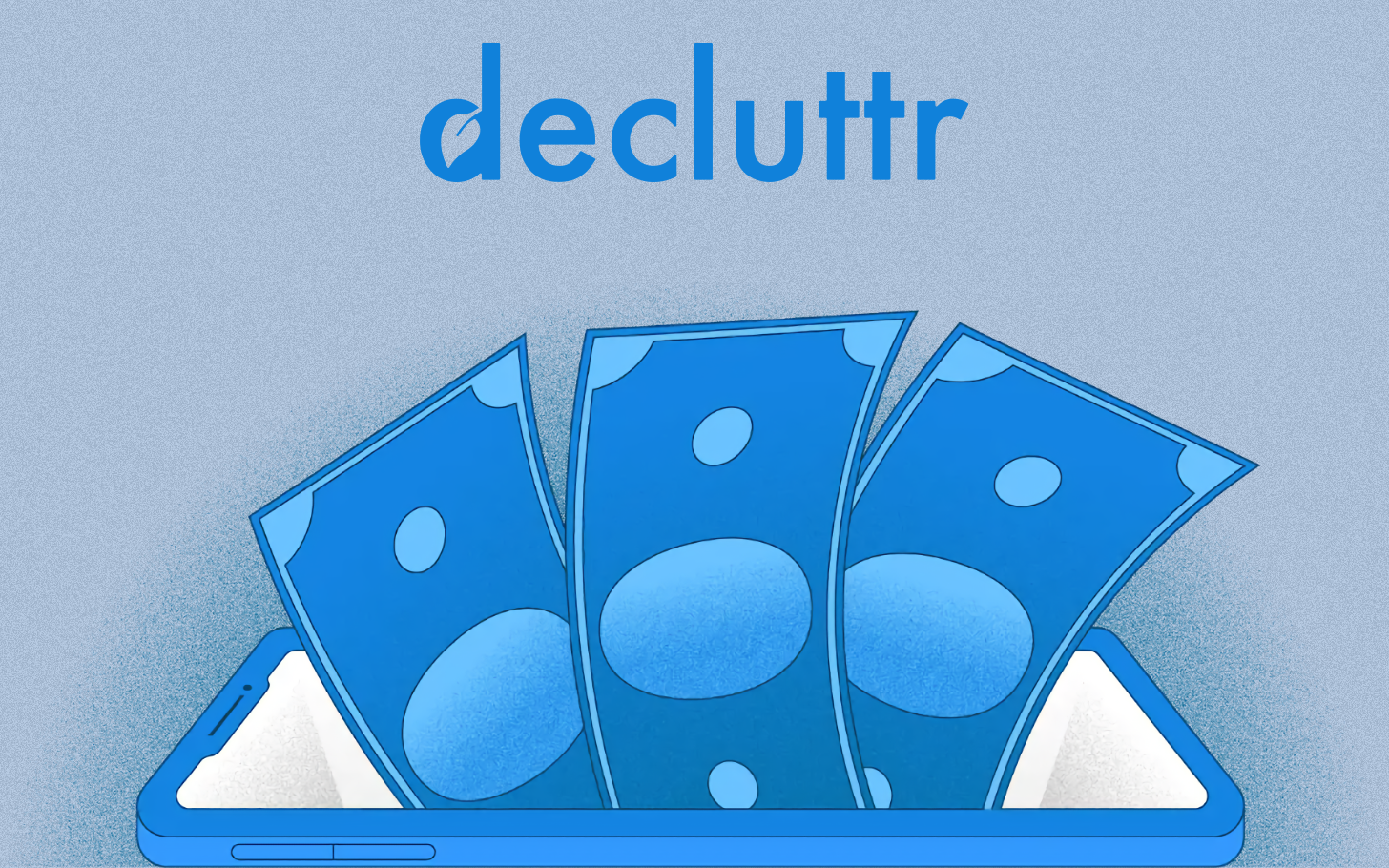 Just because your phone isn’t worth as much as it used to be doesn’t mean it’s not worth anything at all. You can actually get quite a bit of money by selling it, as long as you know where to go.

Cut to our newest partners, Decluttr. They take old electronics — including phones, tablets, wearables, and a bunch more — in exchange for cold, hard cash. You won’t find any useless store credit or coupon vouchers here; just real money that you can spend on fun things, like your next phone, hot yoga classes, or a shawarma maker. Plus, Decluttr pays up to 33% more than carrier buyback programs offer, which unless you hate more money in your pocket, is a pretty solid deal.

To get started, head on over to Decluttr’s website and enter a bit of information about the phone you want to sell. Decluttr will then present you with the amount they’re willing to pay for your phone and lock in that price for the next 28 days, giving you time to decide and/or purchase a new device. Even better, Android Police readers can add 10% more cash (up to $30) to their phone’s value by using the code POLICE10 at checkout. When you’re ready, simply ship your phone off to Decluttr’s warehouse, and you’ll get paid one day after it arrives. It’s that easy.

To learn more about Decluttr, including how you can lock in the value of your current phone for the next 28 days, check out Decluttr’s website here.

Note: This post is an ad. The content inside does not represent the views or opinions of the Android Police team. Posts like these help fund all the great stuff you see on AP, and you can help support us further by checking out the products or services featured on this page.

Buying a new car is a challenge amid a global chip shortage and limited inventory. Here are tips for finding a decent deal