Unsurprisingly, Microsoft has spent the last year and a half focused on making Teams as great as it can be. It’s not the only messaging tool the company owns, of course. Skype might not be what you turn to in the age of Meet, Duo, and — yes — FaceTime, but it’s still a massively popular tool for communicating with your friends and loved ones online. Microsoft is working hard to modernize the once-dominant video chat app, starting with an all-new redesign in its latest update.

There’s a lot new in today’s announcement, but it’s Skype’s call grid that is getting the most attention. The app’s main layout — which Microsoft calls the “call stage,” apparently — has new layouts and features to help it catch up to the competition. For example, all users are now included in the grid, even if certain users have their video disabled. Your own video feed will also show up in the feed, so you can see how you look next to your fellow call members. Together Mode and screen sharing also use larger video previews along the top bar, so you can actually see the people on the other side of the call. And with a brand-new tool called “TwinCam,” you can pair your smartphone with your call on the fly to add a second — and more importantly, portable — camera to the conversation.

Those are all functional changes, but Skype hasn’t forgotten to spruce up its UI either. This update comes packed with new themes, as well as gradient icons for contacts. Customized notification sounds will finally let you ditch the classic Skype sound library — RIP to those bleeps and bloops — and an improved reactions chooser makes it faster to send an emoji while on a call. Even smaller usability changes, like expanding the web client to include all browsers, feel destined to make up for years of shortcomings. 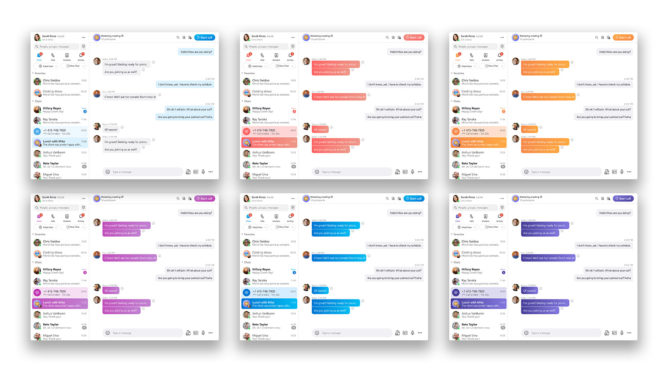 All the visual polish in the world can’t change how sluggish the app has become since Microsoft first bought it nearly a decade ago. This update improves Skype’s performance in “key scenarios” by 30% on desktop, making for an overall better messaging experience. As for the mobile app, today’s blog post claims a whopping — and nearly inconceivable — 2,000% boost on Android. I haven’t used Skype on a phone in years, but that number sure makes it sound like it’s been a miserable experience.

It might’ve seemed like Skype was in danger of being abandoned, but today’s news reconfirms the app is here to stay. All of these features (and more) will be coming to users over the next few months, so keep an eye on your incoming updates.