Time was, OnePlus phones were always incredible deals, but the price crept upward with each iteration, and now we’re in a place where OnePlus is competing with Samsung in the flagship space. The company can still bring a great value to the market, just not at the high-end. The Nord N200 5G is currently the cheapest 5G phone in the US, and it comes with remarkably little in the way of “5G tax.” For $240, you get a 1080p display, the brand new Snapdragon 480 SoC, and pretty good software.

The Nord N200 isn’t perfect, but in some ways, that just reminds me of the old days. The camera could be better, and you lose OP classics like Dash Charge and the alert slider. Still, the specs surpass similarly priced phones, and that’s what made OnePlus notable in the first place.

The Nord N200 bears more than a passing resemblance to the 2020 Nord phones. It’s an all-plastic affair, but OP managed to make the device look and feel surprisingly high-end.  The plastic back is matte and transitions smoothly to the glossy plastic frame. It reminds me a bit of the plastic used in the base Galaxy S21, which is a compliment. I’m slowly but surely coming around to this “glastic” trend. The camera module is in the top left corner of the back sporting three sensors and a flash inside the raised rectangle. OnePlus really dressed up the camera lenses with big cutouts even though the sensors are tiny. It looks nice, but it’s sort of like slapping an oversized exhaust on a base model Civic.

On the right edge, you’ve got a fingerprint sensor built into the power button. The sensor is fast and reasonably accurate in spite of the small size. My only qualm is that the sensor is always active, even if the phone is alseep and the button has not been pressed. That means you can just rest your finger on the button to wake and unlock the phone, but this only works about half of the time. However, I’m constantly triggering the sensor accidentally while holding or carrying the phone around. Brush the button a few times, and fingerprint unlock is disabled. OP needs to tune this feature a little bit.

The volume toggle is on the left side. Instead of a long toggle, it’s two separate floating buttons, and they feel very sturdy for a plastic phone. Down on the bottom, you get a headphone jack (yay), the USB-C port, and the mono speaker. Sadly, there’s no alert slider like high-end OP phones. However, you do get NFC, which is oddly rare in budget phones. If you care about the vibration motor, I’ll just say this one is as bad as you’d expect for the price. Because I do care about this, it’s a constant reminder that this isn’t a premium piece of hardware. It’s just doing a good impression of one. 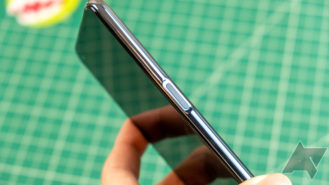 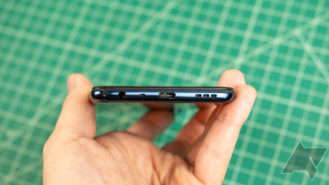 The 6.49-inch LCD is one of the highlights. Although, I’m surprised this is where we are. In 2021, most budget phones in this price range are shipping with 720p LCDs instead of 1080p. I’m not sure if this is a response to the Pixel dominating in the $300-400 space, but the Nord N200 is one of the few new budget options with a sharper 1080p screen. The colors and viewing angles are typical for a good LCD, but it won’t match OLED. There’s a bit of backlight bleed around the edges and the punch-hole selfie camera, which is also expected for LCDs. I saw this mostly in low-light settings, but it’s no worse than the bleed on Nokia’s budget phones. OnePlus supports a 90Hz refresh rate here, which is all but unheard of for a cheap phone. The chin below the screen is a bit larger than the other bezels, but it’s not distractingly big. 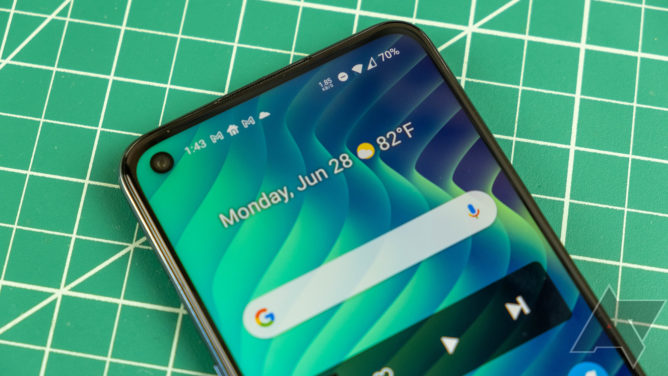 I’m sure you will not be shocked to learn that this budget phone doesn’t come with much in the box. It’s just the usual array of documents, a SIM ejector, and the charger. However, it’s not Dash Charge of any sort. The adapter tops out at 18W, and it uses a USB A-to-C cable.

The software loadout on the Nord won’t surprise you, either. It’s Oxygen OS with an Android 11 base. Still, some budget phones from early 2021 are still waiting on the Android 11 update. OnePlus hasn’t been as reliable on updates as it once was, but the company still promises at least one OS update and three years of security patches. I would have liked to see at least one more OS update, but it’s a minor shortcoming at this price.

Oxygen OS is the same streamlined, mostly lag-free experience we’ve seen on OP’s other 2021 phones. It’s a “light-touch” modification of Android with Discover on the home screen and only a few custom apps. OnePlus uses Google’s stuff for basic functionality like messaging, the dialer, and more, which I’m always happy to see. The handful of custom features bundled with the phone work well, and there’s no annoying cruft. I’m particularly enamored with OnePlus Switch. The migration from another OP phone is incredibly smooth. That said, I’m using the unlocked version of the phone. T-Mobile’s phone will probably have a few extra apps.

With the Snapdragon 480 and 4GB of RAM, I expected the N200 to perform well. And it did, for the most part. Apps open quickly, and the phone maintains high enough frame rates to take advantage of that 90Hz screen most of the time. I’ve noticed some lag in the camera app, particularly if you open it from the lock screen. Android Auto also seems weirdly slow. And yes, OP still has overly aggressive memory management, but it makes more sense when there’s only 4GB of it instead of 8 or 12GB. Apps will remain in memory long enough, I think. Just don’t expect a game to sit in the background all night. 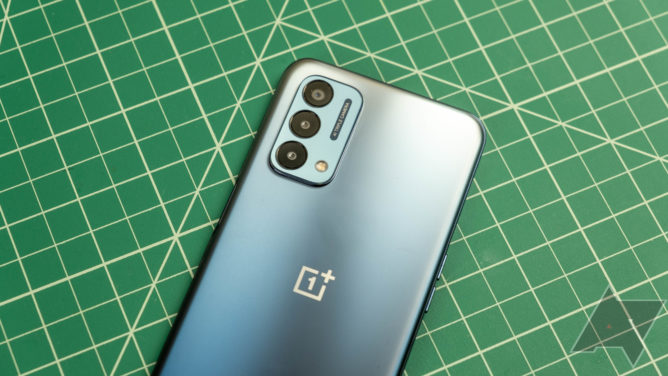 The camera setup on the N200 appears unchanged from the N100 last year. There’s a 13MP primary camera with a f/2.2 aperture, and that’s the only shooter of consequence on the back. There’s also a 2MP macro camera, which takes predictably terrible, fuzzy photos. And then there’s the 2MP depth camera, which is supposed to help with portrait photos. We can safely write this one off, too. The Nord excels in most other hardware categories, so it’s clear OnePlus had to cut some corners with the camera.

The primary camera takes acceptable photos outdoors, but it does struggle in scenes featuring lots of light and dark areas even when HDR is on. Despite photo processing that bogs down the phone, the final results never look as good as I’d like. The indoor performance is rough, as well. It takes too long to capture, and images are often soft and underexposed. Still, no budget phones take amazing photos until you get to the Pixel 4a at $350, so you’re not missing out on much.

Yes, especially if you’re on T-Mobile. This phone is the cheapest way to get on 5G, and that’s something that finally (kinda) matters in the US. The unlocked phone will do 4G on Verizon and AT&T, but Tmo (and by extension Google Fi) is the only way to connect to 5G. It has all of T-Mobile’s current sub-6 bands, but coverage will vary, and there’s no millimeter wave. You should not lose any sleep on the last count, though.

Update support is notoriously bad on cheap phones, and OnePlus is not exactly knocking it out of the park even on its flagship line. Still, it promises at least one OS update to Android 12 plus three years of security patches. Assuming OP can live up to that, it’s respectable for a budget phone. 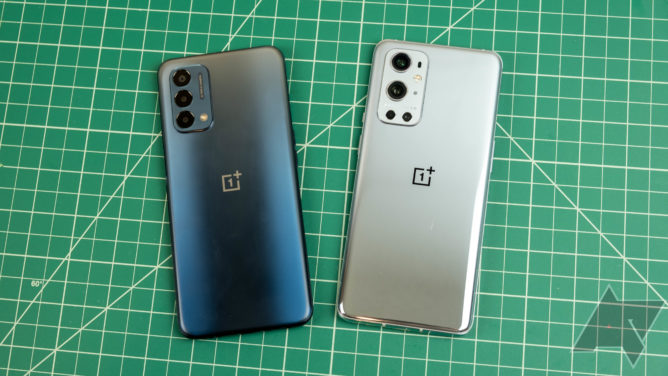 OnePlus managed to equip the Nord N200 with solid hardware, including a 1080p 90Hz screen when most other budget phones have gone back to 720p. The build quality is also above and beyond what I’d expect for $240. It feels like a much more expensive phone, at least until you try to take pictures. The mediocre camera array is the weakest point for the Nord—anyone who snaps a lot of photos should look at spending a bit more on a Pixel.

I’ve spent more time with the N200 lately, and I’m still impressed every time I pick it up. This phone looks and feels like it costs more than $240. The only physical aspect that spoils this impression is the vibration motor, which is shockingly bad. Yes, even for a phone in this price range, the flat, blubbery vibration is often more trouble than it’s worth. For example, trying to type with haptic feedback enabled is an exercise in frustration. 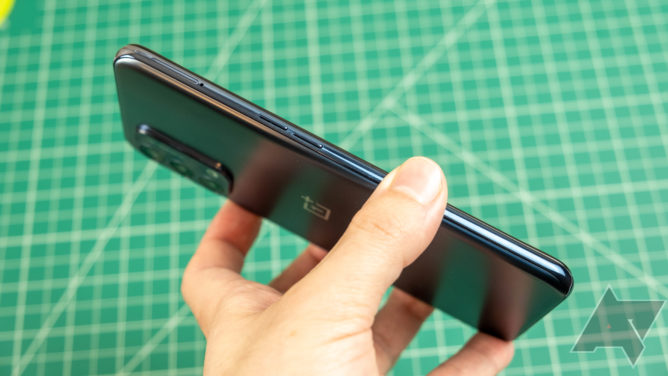 I was worried about how the plastic frame would age, but it’s still looking like new (before I had to swap my phone, read on). That’s after the phone rattled around in a drawer for a week here and there while I used other devices.

On the software side, the Nord has been getting its promised updates. The phone was patched last month (August 2021) with a new update that advanced the security level to August 1, 2021. I hope OnePlus can keep up because it’s rare to find phones this cheap that get reliable updates. Note: I did have to get a new phone to verify this—my original unit was stuck on a pre-release version of Oxygen OS. I don’t believe this should impact any retail units, but you never know.

Performance doesn’t seem any different to me after the update. The phone is still fast enough for basic tasks, stuttering here and there but generally chugging along without causing me too much frustration. Future updates could push performance one way or the other; much slower and that 90Hz screen will only serve to remind you how many frames you’re dropping. The battery life is superb, though.

My biggest concern might be what happens to the phone as OP moves away from Oxygen OS to its new unified platform with Oppo. If OnePlus tries to roll out unoptimized software to the Nord, its performance could easily drop into unacceptable territory. That’s all speculation, though. In the here and now, the N200 is a great purchase for anyone looking to get a budget 5G phone. T-Mobile will even still give you one for free with a new line after all these months.