Thanks to Samsung’s Galaxy Watch4 and the long-awaited Wear 3.0 update, there’s no denying that there’s a reinvigorated interest in the platform. Not that you’d know from using the TicWatch E3. The E3’s biggest issue is the inopportune release timing—this watch is the definition of a mixed bag with Wear OS still in flux. The good news: this smartwatch offers the latest Snapdragon Wear 4100 chipset, which should guarantee solid performance for years to come. The bad news: Wear OS 2.3.

The modern hardware and dated software ultimately makes this watch a tough sell right now, but it could get better once the expected Wear 3.0 update arrives… in 2022. I can’t predict the future, and the TicWatch E3 is far from perfect in its current state, but as a budget device priced at $200, many of its imperfections are excusable.

The TicWatch E3 is an absolute unit. It’s 12.6mm thick, slightly larger than the TicWatch Pro 3 at 12.2mm, though the E3 is a good 10 grams lighter since the casing is polycarbonate, so it’s an odd mix of size and weight. Thankfully this smartwatch doesn’t look crazy on skinny wrists (like mine), but you’re not going to want to sleep with it on. It’s simply too bulky—you’ll wind up scratching your face with its hard edges, or you’ll snag your pillows and sheets constantly.

Mobvoi launched the TicWatch E3 as a budget option compared to the Pro 3, and it’s priced competitively at $200. This watch includes the new Snapdragon Wear 4100 along with a heap of tech stuffed inside, including a speaker, bluetooth 5.0, NFC, GPS, SpO2 sensor, and a heart rate sensor. For the price, you could do much worse, especially since we know the E3 will receive the Wear 3.0 update in 2022. We don’t know exactly when this update will land next year, but the E3 should see a generous lifespan for a wearable.

Unlike the TicWatch Pro 3, you only get one screen with the E3, and it’s LCD. The glass of the screen is tempered, but it’s not Gorilla Glass. Blacks definitely suffer because of the display choice, and other colors look slightly washed out, so the screen won’t be winning any beauty contests, but it gets the job done without impacting battery life. The TicWatch E3 doesn’t offer a physical dial for scrolling, nor a crown you can twist. You only get two button nubs on the right. One pulls up the app drawer, and the other quickly gets you into Mobvoi’s exercise settings, which can be customized to any app shortcut you wish. There is a thick black bezel around the entire screen, but at least there are no ugly number notches. 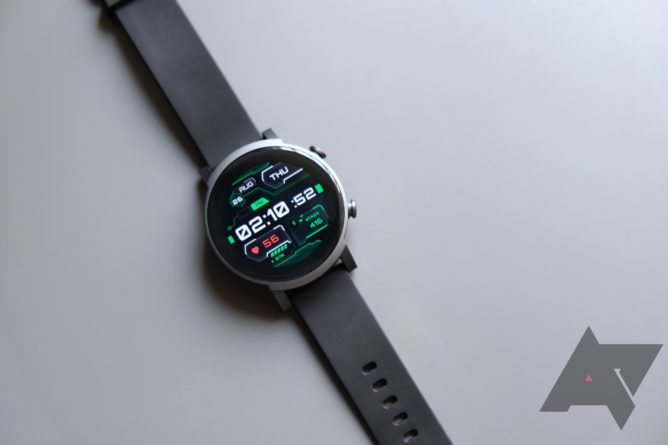 The TicWatch E3 only comes in one color: Panther Black, which looks a little closer to gunmetal grey in real-world lighting. This dark color compliments the default 20mm black rubber band that comes strapped to the unit. You can replace it with your own standard watch band, or one of the colorful 20mm options on the Mobvoi store. You can expect to find a proprietary charger in the box, a fairly basic USB-A cord with a moon-shaped magnetic tip at the other end that connects to the underside of the watch to charge its 380mAh battery. No power brick is included, but there is an instruction booklet.

The TicWatch E3 is running a stock build of Wear OS 2.3, and performance is snappy. Swipes and gestures work with little to no delay, a refreshing experience for a Wear OS device. The app drawer offers two rows of apps, all easily tapped to open despite the small screen, and Mobvoi offers the TicExercise app in the drawer that houses a range of exercise tracking options. Essentially Mobvoi offers extra software loaded into Wear OS to make up for Google’s many shortcomings, extending to the Mobvoi phone app for your phone.

All of the expected Wear OS software features are here, such as on-device notifications, exercise tracking, Google Pay, and Assistant support. Wear OS, even before the big 3.0 update clearly has a lot of features, but they can be frustrating to use. For example, Assistant is a lag fest, and you need to enter a PIN to use Google Pay on that tiny screen. The onboarding process is a confusing assault of modals and dialogs you have to agree to and swipe through, and then you have to install the Wear OS app on your phone just to get the watch working. Really, this sums up the software situation for Wear OS. Robust, but annoying.

Once set up, you can install the Google Fit app on your phone to track exercise. If you thought the Wear OS app would offer tracking, think again—improved fitness tracking is one of the features that’s supposed to come in the Wear 3.0 update… eventually. There is the Mobvoi app, which offers a much more extensive selection of exercise tracking options over Google’s Fit app. That’s three off-device apps for something ironically called a smartwatch. Luckily you are free to choose which apps you prefer for your exercise tracking. TicMotion is included with Mobvoi’s software, which offers a toggle to auto-detect your exercises, a rarity on Wear OS devices. However, just like the TicWatch Pro 3, automatic exercise detection can be hit and miss. You can also use popular third-party apps like Runkeeper to track your exercise. So even though setting up the device is a confusing mess of agreements and apps, the silver lining is that an open ecosystem affords you some personal choice. Sadly a system wipe is still required if you wish to connect the watch to a new phone, another annoyance I’m honestly surprised is still an issue with Wear OS.

From left to right: Wear OS, Google Fit, and Mobvoi

Battery life is excellent, and even though the 380mAh battery pack sounds small, you’ll get two days out of a single charge, and that’s with always-on display and continuous heart rate tracking. If you let the screen sleep and you turn off constant heart rate tracking, you’ll get almost five days on a single charge, and there’s also a unique Mobvoi feature called Essential Mode that will allow you to eke out even more battery life by sacrificing most of the smart features. While everyone’s use case will be different, there are sufficient battery-saving options to keep everyone happy. 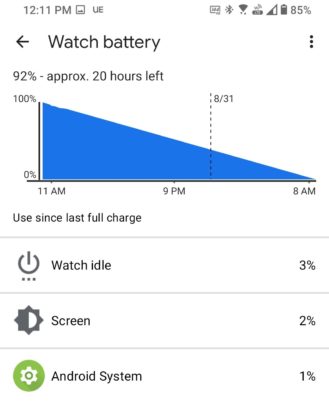 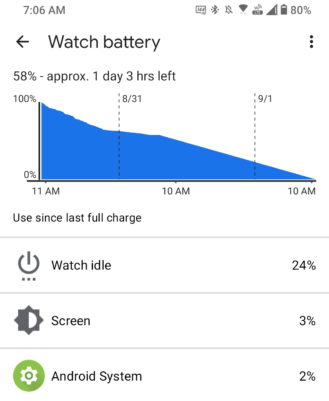 But when it comes to third-party software, well, things aren’t great. Wear software development has stagnated dramatically, seeing as there was no incentive for anyone to develop apps for a seemingly abandoned OS. While new faces have been released here and there for the last few years, things have definitely picked up since Samsung’s Galaxy Watch4 announcement. This is all to say that the current Wear OS ecosystem isn’t all that healthy, though things are looking much brighter than they have in a while. So as far as genuinely useful apps go, it’s slim pickings, but this could change soon. For instance, Spotify finally added an offline play function to its Wear app.

Maybe. The price is right, and the hardware is on point, but some of the functionality feels useless when the watch is so bulky. Few people will want to wear the TicWatch E3 through the night, cutting out the usefulness of sleep tracking and 24/7 heart monitoring. Sure, you can still technically perform these actions, but you won’t be comfortable, and last I looked, paying a couple of hundred bucks to be uncomfortable isn’t awesome. Then again, exercise tracking works well, and the watch supports tracking with many different third-party Android apps, so if you’re into sports and exercise, the TicWatch E3 excels at its price point. 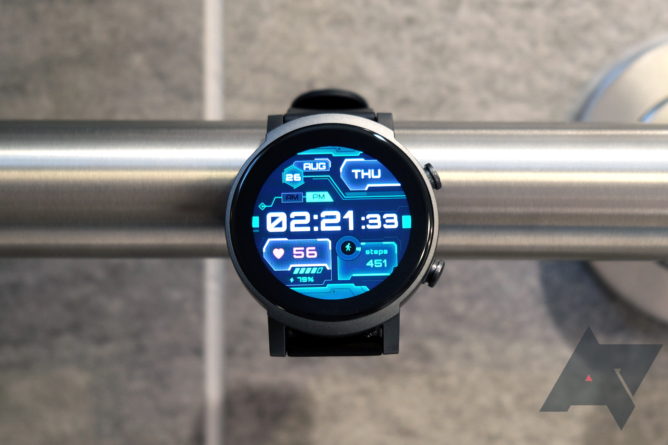 So, it all comes down to what you’re looking to do with a Wear OS device. Technically the TicWatch E3 is almost as competent as its older brother, the TicWatch Pro 3, offering a similar feature set in a cheaper package. You’re not going to win any style contests wearing the TicWatch E3, and you’ll have to patiently wait for the Wear 3.0 update to land in 2022, but if you’re the sort that requires the best tech on the market right now… well, that’s not the TicWatch E3. It is, however, a good budget smartwatch for $200.

Half a million without power in Louisiana, Mississippi amid new flash flood warnings