Are you disappointed with the Samsung Galaxy S22 Ultra design based on the leaked renders? Well here’s something that might cheer you up. The Galaxy S22 and S22+ renders have also made their way to the internet, and they look substantially better than their Ultra sibling.

The leaks come courtesy of 91Mobiles, Zouton, and OnLeaks, with the latter having a reputation for being spot on with his renders. They show that unlike the boxy design of the Galaxy S22 Ultra, the Galaxy S22 and S22+ will feature a design that’s largely unchanged from their S21 counterparts.

On the Galaxy S21+, Samsung curved the chassis to create an illusion that the camera frame blended with it. That does not seem to be the case on the Galaxy S22+, as in the renders, the camera housing is clearly distinct from the chassis. The front of the device is dominated by the display surrounded by symmetrical bezels, with a centered punch-hole for the selfie camera located at the top.

The Galaxy S22+ is shown in an olive green color in the images, with the rear vertical camera hump having a darker shade for a contrast-y look. Apart from green, Samsung is rumored to offer the S22 and S22+ in white, black, and rose gold colors. What’s more interesting is that Samsung could once again change the naming of its Galaxy S lineup, with the S22+ being renamed to Galaxy S22 Pro.

The Galaxy S22 does not seem to feature any major design changes when compared to the S21, though it will seemingly be slightly more compact in size due to its reportedly smaller 6.06-inch display. 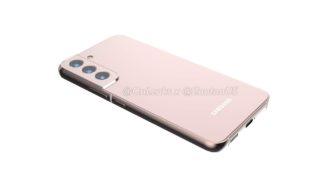 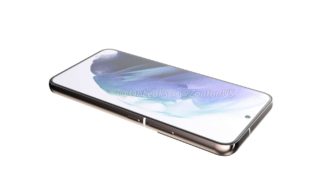 The Galaxy S21 and S21+ were great-looking phones, so Samsung carrying over the same design language for its non-Ultra Galaxy S phones in 2022 is not a bad thing. Plus, the S22 and S22+ (S22 Pro?) actually look like Galaxy S devices with their rounded edges. That’s unlike the Galaxy S22 Ultra, which gives more of a Note vibe with its boxy design and S Pen slot.

Nonetheless, the Galaxy S22 series is not expected to launch before early 2022, so Samsung still has some time in its hands if it decides to change certain design aspects of the devices.