Google just released a new software remote for Android TV and Google TV devices. That’s a fancy way of saying that you have a new way to use your phone to control your smart TV’s Android-powered guts. Of course, Google’s had a dedicated app with that functionality for a while, but it wasn’t great. In fact, Google recently de-listed and ended support the old app. So, what’s this new method like? In short: Pretty good for most people.

I’ll admit, it’s been a while since I used the old dedicated Android TV remote app, but the memories I have from it weren’t particularly positive. The design fit during the Holo and early Material era, but it’s visually dated, offered limited controls, and I have a lingering impression of jank and lag from using it years ago. Cody Tombs reminisced over it with me and his more recent impressions, detailing connection issues, lost pairing, and device switching problems with the old app. The new remote improves on basically all of these things, though it’s not without its own peculiarities.

How to get the new remote working

Before we begin, I should point out that we can’t guarantee the new remote will work for you. It could be regionally limited, as we couldn’t get it working on a Chromecast with Google TV in France. Furthermore, folks have been having trouble with triggering the feature. There are a lot of variables, and everyone seems to be having a different experience with availability during the feature’s ongoing rollout. Even though Google provided us with detailed prerequisites, fair warning: You may still run into trouble or the feature may not work.

To start, you need to havean Android phone running Android 4.3 or later with Google TV app version 4.27.8.93 or later installed. That’s available on either the Play Store or APK Mirror if you don’t already have it. A handful of reports claim it still works using older versions, but Google does say that a requirement.

Once all three apps across both devices are running the right versions, you’re should be good to go for the rest of the setup process. Your phone needs to be on the same Wi-Fi network that the Android TV or Google TV device is connected to. Then, fire up the Google TV app, tap the new floating action button for the remote that you should see, grant the app some location permissions, enter a pairing code, and you’ll be taken to the new remote. But that isn’t the only way to access it, either.

One of the best things about the remote is that you can set it to be a quick settings toggle, easily accessed with a swipe and a tap. In my testing, once all those prerequisites are in place and you’ve launched the Google TV app at least once, you should have the option for the new quick setting tile available in the quick settings edit menu. You can even add it to your first set of faster quick settings shortcuts.

Once you have all the prerequisites in place, setting up the remote is a surprisingly smooth process. But actually using it is when you might run into a few problems.

Hands-on with the new remote

I used the new remote with my Chromecast with Google TV, and though the experience may differ slightly depending on what you’re using it with (which I’ll touch on later), it should be similar, and most things will work about as you expect.

Google offers an optional D-pad, but the default controls offer swipe-based navigation that’s pretty easy to use. Just swipe the direction you want your selection to move to, and that direction is provided as input. There’s no weird MacBook-like reverse scrolling weirdness to the gestures or anything like that, just push where you want to go, or you can switch to the stereotypical D-pad.

The optional D-pad on a taller display.

Below the directional input area, you have a handful of extra buttons, including a row for navigation (Back & Home), the Google Assistant, and a row for volume controls that may or may not appear for you — more on that later. Hardware volume keys will also control volume while in the remote UI, so you can quickly and easily change the volume without even looking at the screen.

Up top, you have a button to exit the remote view, a drop-down menu to select other Android or Google TV devices (should you have more than one), a button to trigger text input, a power button to turn things on or off, and a three-dot menu that lets you switch directional input types. That power button can also indicate the current state: Red for powered down, white/gray for on.

When you select or enter a text field, Gboard opens so you can type, as the old app did. Of course, this still doesn’t fix the problem that many Android TV apps use non-standard text input fields. YouTube, of course, loves to do everything it possibly can in its own very dumb way, and the Android TV app is no exception. Searching for something on YouTube via the Android app remains an awful time without a standard text input box. But, that’s not really a problem with the remote, just developers (including some of Google’s own) inflicting their obstinacy on unsuspecting customers.

The text input field the remote displays on your phone can even accept a copy/paste. It works nearly instantly, and I find it pretty handy. Anecdotally, I like to keep lists of titles I’m waiting to watch in Google Keep. I’m that guy at parties that actually makes a note of the names of books or TV shows to check out when someone talks about them and they sound like my jam, so this will be a big personal time-saver for me compared to the tedium of entering titles with a hardware remote. If typing isn’t your style, you can also do voice input, either via the voice input in Gboard or by using the remote’s Assistant button to search for things.

There are three notable issues I ran into when using the new remote over the last weekend. Sadly, the first one isn’t really Google’s fault.

As you can easily see in many of my screenshots above, volume controls didn’t work for me at all. But that’s not Google’s fault, it’s mine and Samsung’s. Though my TV has Anynet+ branded HDMI-CEC functionality and should ostensibly be able to accept the required volume commands from my Chromecast with Google TV via HDMI, my TV won’t actually allow external devices to control the internal volume. Every manufacturer handles HDMI-CEC a little differently, and the version in my TV can apparently pass volume commands back through to an external device, but it won’t work for my TV’s built-in speakers. (Thanks, Samsung.) That means that although my Chromecast with Google TV can adjust my TV’s volume using IR on the included hardware remote, it can’t be configured to allow the software remote to adjust my TV’s volume itself.

If your TV has Android or Google TV built-in, Google tells me that this won’t be an issue, and volume controls will work correctly without any finagling. So far as I can tell, even just a soundbar would likely fix my problem — and when I get around to that or rebuilding my receiver/speaker setup, I should be fine. There’s also another workaround you can do on some Android TV devices, like the Chromecast with Google TV, telling them to control volume internally on their own (Settings -> Remotes & Accessories -> Set up remote buttons -> Chromecast volume), and that could be a solution for some — though it can introduce its own potential problems.

With and without volume controls — they’ll appear automatically depending on how you have things configured.

The second issue I ran into could be device-specific, but either way, it shows an inconsistency in Google’s interface between hardware remotes and software. For me, using the Assistant button for voice input was sometimes unreliable, simply not accepting voice input. While that could be the fault of my Z Flip3, the mechanism for triggering the Assistant via the software remote is also different than it is on Google’s hardware remote for the Chromecast with Google TV. On the latter, you press and hold while speaking for the Assistant to listen. On your phone, you tap once, and it starts listening, but pressing and holding does nothing. If you’re used to using the hardware remote, you’ll have to re-learn to do that differently on your phone. Google should probably make both methods behave the same for consistency — not that Google is exactly known for UI consistency.

Lastly, I noticed that sometimes it can take an order of magnitude longer to spot the Android/Google TV device when you fire up the remote. My Z Flip3 can usually see it within a few seconds, but my Pixel 4a can randomly take 10+ seconds to see it. That might not seem like a big deal, but if you’re pulling your phone out to rewind a bit while in the middle of a movie, it could be frustrating to sit and wait for it to be detected.

However, it’s also worth stressing that these are really the only issues I had, and one of them isn’t even on Google. I didn’t run into any problems with random disconnections, as I remember experiencing long ago on the old Android TV remote app. Input was arguably a tiny bit more laggy than the hardware remote, but that lag was tiny, consistent, and basically unnoticeable in practice. Plus, having the remote available via a quick setting button is a huge convenience. On the other hand, the inconsistency of this feature’s rollout and the fact that most people don’t seem to have it yet is also a little frustrating.

Ultimately, I expect that I will eventually like the new software remote, though I’ll need to spend a little more time playing with my volume controls to make them work for me — or buck up and get a soundbar/put my audio system back together. (I’ve been short on time since moving and frankly don’t watch a lot of TV.) But I think many of our readers can probably follow Google’s advice and let their hardware Android TV remote stay lost the next time it disappears. 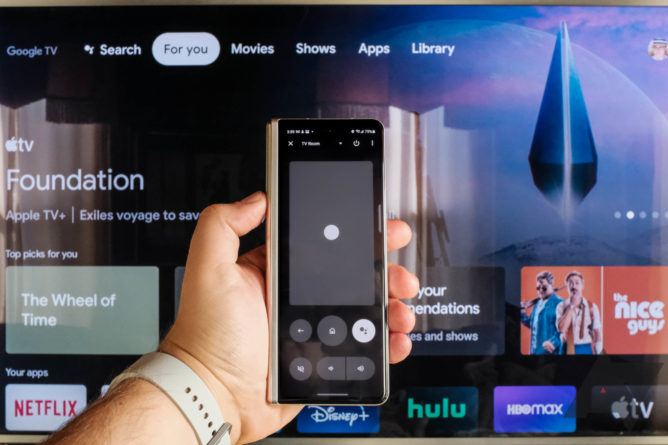 Long-time readers will remember me as “that guy at Android Police who really hates remotes,” and it’s true. I just can’t stand the idea of them when I’m literally carrying a phone everywhere. Why would I want a dumb piece of plastic, easily lost, with batteries that can go dead, and a dedicated “Netflix” button when my phone is right there, always in my pocket, its screen isn’t limited to the buttons it was built with? My house is loaded with Assistant-connected speakers and displays, too, so why rely on a dumb plastic stick? It just doesn’t make sense to me, and after countless discussions with my coworkers and readers, I don’t think it ever well.

But even if you love the idea of remotes and we can’t ever be friends, if you have an Android TV or Google TV-powered device, Google’s new software remote is still worth a look for those times you can’t find it. But, until it rolls out more widely, good luck getting it to work.