Google Stadia vs. Xbox Cloud Gaming: Which is the streaming champion?

If you’d told me five years ago that one day I’d be able to reliably stream video games to my device over the internet in the same way we do videos on YouTube, I’d have laughed. Services like OnLive had given it a go, but it still felt like it was a long way from going mainstream. Then came Google in 2019, promising the world with Stadia and under-delivering in a way only Google can. Nearly two years after its troubled launch, Stadia has matured into a decent service, but it faces stronger competition than ever before in the form of Xbox Cloud Gaming. So, which is the better streaming service?

Trying to pit these services against each other in a fair way wasn’t easy; there aren’t a ton of games that are available on both services, and the ones that are tend to cost money. I tried using Hello Neighbor in my testing, but sadly it’s badly optimized on both platforms, dropping frames and suffering from severe input lag regardless of which device or service I used. Star Wars Jedi: Fallen Order and Destiny 2 are both visually lush, AAA games that are each available on both services, so I’ll primarily be referring to those.

In my testing, I played on my Windows 10 gaming PC, Google Pixelbook, Galaxy S21 Ultra, iPad Pro, and Nvidia Shield TV. All of those devices are connected to Google Wi-Fi with 500 Mbps fiber broadband, and I’m using the same Xbox One controller for everything. The screenshots and clips you’ll see were captured locally on my PC rather than server-side, for a fairer real-life account of the experience.

Graphics, much like special effects in movies, mean different things to different people. Some don’t care about them being the best so long as the story and gameplay are sound, while others struggle to immerse themselves in a game if it doesn’t look its best. If you find yourself in the latter group, streaming probably isn’t the best way to play games, but if you have your heart set on giving it a go, the clear winner is Stadia. Stadia can offer up compatible titles in 4K, while Xbox Cloud Gaming maxes out at 1080p.

Stadia never seems to go above 1080p for me, though. My PC, iPad, and S21 Ultra are all using high-refresh 1440p displays, and my Shield is connected to a 4K TV, but despite Stadia Pro officially offering 4K (and 1440p support as of March 2020), all of these devices maxed out at 1080p. I checked the connection speed on all of these devices, and they all demolished the minimum requirements for 4K. So while Stadia offers better resolution options on paper, your mileage may vary.

As you can see from our Jedi: Fallen Order screenshots above, Stadia seems to do a better job of maintaining visual fidelity — and that’s especially noticeable in shaded areas. On Xbox Cloud Gaming, the shadows to the right of the stairs look like they were made in Minecraft. That’s distracting enough in a still image, but when you add motion and start running around, it gets even worse. Sadly, Microsoft’s visual woes don’t end with blocky shadows. Some Xbox Cloud Gaming games are also rendered at lower quality than their Stadia counterparts. Focus your attention on the diamond pattern on the wall to the left of both screenshots: it’s nice and sharp on Stadia, but Xbox Cloud Gaming? It’s there, but it’s low resolution and fuzzy. Like the shadows in Fallen Order, this is something that looks a million times worse when you’re moving through a level.

This analysis is only scratching the surface; with hundreds of games on each platform and dozens of variables affecting stream fidelity, we’re simply not equipped to definitively say which service looks better overall. But anecdotally, even when Stadia fails to hit its target resolution, it tends to look nicer than Xbox Cloud Gaming does.

Both platforms perform remarkably well, but once again, Stadia has a couple of advantages up its sleeve. The biggest of these is the hardware the two services run on. Xbox Cloud Gaming started off using modified Xbox One hardware but transitioned to Series X toward the end of June (maybe that’s why they’re impossible to buy). Stadia, on the other hand, uses more conventional PC hardware. While the Series X is more than powerful enough for the task, it enforces one major limit — you’re always playing the console version of a game, which is built around a controller.

If you have an Xbox, it technically allows you to play using a keyboard and mouse, but all you’re really doing is mapping them to the controller inputs, and the result leaves a lot to be desired. Xbox Cloud Gaming doesn’t even try to make use of this and only works when a controller is connected. That’s fine for a lot of gamers and is OK for me when playing a racing game. But in titles that require fine aiming, the lack of mouse input is a massive letdown.

GRID on Stadia and Forza Motorsport 7 on Game Pass

Outside of the controls, Stadia still has a slight edge. Xbox Cloud Gaming games are perfectly playable, but Stadia maintains steadier frame rates and has less input lag. That benefit was consistent across all devices tested, especially for Android TV, where Xbox Cloud Gaming really struggled. Despite Xbox doing slightly worse than Stadia, it’s still good enough to play racing games, which are more adversely affected by input lag than others.

Availability is one of the most important factors when choosing a platform like this, seeing as the point is to play on any of your devices wherever you go. Stadia is available on Android and Android TV through the Stadia app, iOS via the browser and any PC on any OS via browser.

Xbox Cloud Gaming is available on Android via the Xbox app, iOS via browser, Windows PC through the Xbox App (currently in beta), other PC operating systems through the browser, and Xbox Series consoles once they are updated this holiday season.

It’s a dead heat when it comes to phones and tablets, with proper apps on Android and web apps on iOS. Things are a bit more confusing on Chromebooks, though, as you’ll want to use both services through the browser despite the fact you can download Android apps on most Chromebooks. Stadia won’t install, pointing you to the web app instead. Xbox Cloud Gaming does install and even works, but it’s far laggier and more inconsistent than playing through Chrome.

If you’re a Windows user, you can stream through the Xbox app, providing one central location for your local and streamed games alike. There doesn’t seem to be a performance benefit, though, with it running just as well in Chrome. It’s worth noting that streaming through the Xbox app is only available in beta, so it might get better. 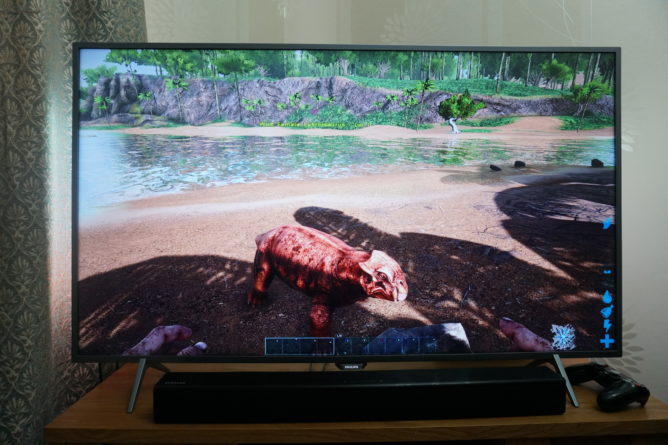 Android TV is where Stadia really pulls ahead with a dedicated app. Playing on my big TV was a breeze and came incredibly close to replicating the console experience. Xbox Cloud Gaming can still be played on Android TV, but it takes more effort than it’s worth. You can sideload the regular Android app, but the performance just isn’t there; even the UI outside of games lags. In theory, you should be able to use a browser to load the web version of Game Pass, but I couldn’t load any games in the browsers I tried, and the very act of navigating a website on a TV is enough to make me pull my hair out and fully commit to a Captain Picard cosplay.

While Stadia’s game catalog started small, both services currently offer large libraries of games, so you’ll have plenty of choices no matter which you go with. Stadia comes with a major caveat here, though — a lot of those games cost extra. While Microsoft’s $15-per-month service gives you access to its entire library of games included in the subscription (plus even more to play locally on PC or Xbox), Stadia will still have you paying for most titles — often full price. Sure, at $10 a month, Stadia Pro’s claim now, keep indefinitely model can be a good value, but only if you’re interested in the handful of titles on offer each month.

If you own a physical Xbox and you’re getting tired of managing your storage, Game Pass with Cloud Gaming may soon be an enticing option. Microsoft will be adding cloud gaming to its Series consoles sometime in the holiday season, hopefully with the Xbox One following shortly after, which could spell the end of storage anxiety — goodbye, enormous Microsoft Flight Simulator install.

So, which streaming service should you choose? The answer depends on what you want to do. If you want to go all-in to game streaming, Stadia is the way to go, with better device compatibility, stronger performance, and a lower price of $10 a month (not factoring in the price of games that aren’t included in Pro).

But if you own an Xbox or gaming PC and want to dip your toe in the water to try out streaming, I’d recommend Xbox Cloud Gaming. In addition to what we’ve looked at today, you’ll get access to over three hundred games that can be downloaded to your computer or console and played conventionally. You’ll need to pay $15 a month for Game Pass Ultimate to try streaming, but when you consider that the price includes an EA Play and Xbox Live Gold subscription, it is the better value option for more conventional gamers, and it’s the one I’ll be keeping once this article is finished.